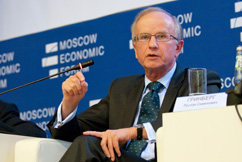 Spasibo bolshoi! Thank you very much! Let me begin with some remarks, brief remarks, about the state of the world before trying to bring part of answer to the question.

First point — we live in a new time, in a new period, because of a kind of globalization unprecedented in the world history, mobility of capital and reduction of transport costs. Second — new sources of growth are emerging in the world and the world see in the new countries — Brazil, Russia, India, China. Third — this development, this phase of globalization brings without any doubt growing inequalities within most countries and between-countries. And fourth: quest for competitiveness leads to neglecting the long-term problems, economy for human beings, sustainable development, climate change, population migrations. In this context what could be done and what is to be done.

Obviously, it was often said yesterday the pure liberal market mechanism is leading to the dead-end. Second point — capitalism in market tends to be world-wind, maybe more than ever. For this reason we need world-wide political regulation which has been attempted with a limited access through G8 and G20. But we need, even if it seems idealistic, unrealistic, we need to build one of the kind of the world democratic government.

Now going back to the question and referring to this time at the national level, I believe we should try to find equilibriums, by lessons, forces at four levels.

First — equilibrium balance between economy power and political power which implies integrity of independence of political power from the economic power and strong political will to use it. Second — balance between state and nation, state and people. Nowadays, and I find this fascinating, there are less and less countries in the world, even non-democratic ones, where decisions can be made without considering people’s judgment and without possibly convincing them. Third — balance which really means real democratic choice between economic efficiency and self-justice. I personally believe, as speakers, many speakers said yesterday, that social justice nowadays is a pre-requisite, is a condition for economic efficiency. Fourth — balance of powers inside the economy, particularly inside the firm, inside the company, owners, lenders, management, workers, consumers, local authorities.

All what it means, as we heard yesterday, social democracy, possibly, even if the historical context of social democracy is different as you know, social democracy usually goes along with strong trade unions and cultural and personal connection between trade union and social democratic party — it’s mainly the North European modern. Inside Western Europe social democracy, more to the left is confronted with a very difficult problem of keeping, adapting, developing social model of guarantees and justice of rights and duties in an open world of competition. To a certain extent it is the same in Eastern Europe with two additional faculties.

How do we free ourselves from the marriage of the past society and how do we belt a social model, social security, health, pensions, employment, family in the world economy. All this rises much more questions than it brings answers. Nevertheless, I like very much the idea of a new social democracy — it gives a name and a reason, meaning to our efforts, wishes and hopes.